A swathe of exhibitions and a new English translation 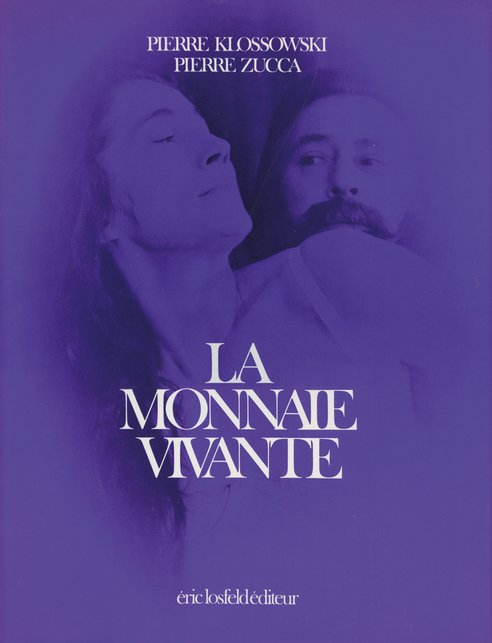 Sex sells: this much we know. We might also take as a given the fact that capitalism can operate in perverse ways. But can we agree that capitalism itself originates in the perverse desires lurking deep within each individual and that these desires actively pursue their own commodification? Such is the argument made by the artist, novelist and philosopher Pierre Klossowski in his 1970 essay La Monnaie vivante (Living Currency), first published in France in a racy edition with erotic photographs made in collaboration with Pierre Zucca. Earlier this year, Bloomsbury re-issued it in English, sadly sans the softcore. The new translation comes off the back of a wave of interest in Klossowski that has grown gradually since his death in 2001. In 2006, a major retrospective of his drawings toured venues in Britain, France and Germany; in 2010, the New York gallery Reena Spaulings Fine Art produced a limited-edition translation of La Monnaie vivante; and, in the last two years, his artwork has been the subject of shows at London’s Cabinet Gallery, in Berlin at Isabella Bortolozzi Galerie and the Schinkel Pavillon, and at New York’s Gladstone Gallery, amongst others.

It’s not difficult to see why Klossowski’s visual art is particularly of the moment. His fantastical scenes of bisexual sadomasochism, his focus on his wife’s androgyny and his depiction of figures with shifting identities all clearly appeal to the vogue for gender fluidity and non-normative sexuality. Earlier this year, his work was even included in a show titled ‘Perverts’ at Cell Project Space, London. But this is only half the picture, because his drawings are something other than artworks or, rather, his philosophy provides a particularly unusual theory of the ontology of art objects.

Klossowski was a pivotal, if underappreciated, figure in 20th-century French theory. The older brother of the equally perverse artist Balthus – painter of provocative little girls and pussycats – he was part of Georges Bataille’s circle of dissident surrealists in 1930s Paris and was asked by Walter Benjamin to translate his essay ‘The Work of Art in the Age of Mechanical Reproduction’ from German into French in 1936. A religious crisis during World War II almost led Klossowski to become a monk, before he made a complete volte-face and published studies of Friedrich Nietzsche, the Marquis de Sade and a number of quasi-theological erotic novels. You could say that he went from one extreme to another. Traces of each of these thinkers are noticeably present in La Monnaie vivante, the last work Klossowski published before choosing to devote himself entirely to visual art.

Cover of the first edition

The neglect of Klossowski’s books has as much to do with his difficult style as it does his work’s intellectual complexity. When, in 1965, Roger Caillois quit the jury of the prestigious literary award the Prix des Critiques, after it was given to Klossowski’s novel Le Baphomet (The Baphomet, 1965), it was not in protest at the book’s content. After all, who could take offence at a tale of the pederast Knights Templar and their sodomitic orgies, in which time itself is suspended and Nietzsche appears as an anteater? No, Caillois’s problem was with the book’s archaic, Latinate and idiosyncratic approach to French grammar. The new English publication of Living Currency – with a lucid introduction to Klossowski’s thought by one of its editors, Daniel W. Smith – should do much to reverse this neglect. More than this, it promises to make a vital intervention in understandings of the relationships between capitalism, affect and desire.

Klossowski’s writings were not always ignored: immediately upon its publication, La Monnaie vivante had a profound effect on French philosophy.

Gilles Deleuze and Félix Guattari openly acknowledged its influence on their co-authored book Capitalisme et schizophrénie. L’Anti-Œdipe (Anti-Oedipus: Capitalism and Schizophrenia, 1972), as did Jean-François Lyotard in relation to his Économie libidinale (Libidinal Economy, 1974), whilst Michel Foucault called it ‘the greatest book of our time’ (although he was notoriously promiscuous with his praise). As Smith points out in his introduction, Living Currency’s key achievement was in overcoming a supposed impasse ‘between Marx and Freud […] the tension between political economy and libidinal economy’. Throughout the 1950s and ’60s, figures such as the philosopher and political theorist Herbert Marcuse had repeatedly attempted

to marry Marxism and psychoanalysis. This led to staunch criticism, most notably from Foucault, that such efforts amounted to merely a theory of repression: they offer no account of how power harnesses, rather than censors, desire.

Living Currency opens with the argument of this repressive hypothesis: that industrial capitalism has been accused of having a deadening effect on emotional life. The book then sets out to challenge the commonplace assumption that what we want most is to be free of these alienating socio-economic bonds: if that’s the case, the author argues, then why do people actively support the very economic and political structures that oppress them? Klossowski responds to this by reversing the terms of the argument: far from repressing feeling, he claims that industry is actually a product of emotional impulses – impulses that actively want to be constrained.Like Nietzsche and Sigmund Freud before him, Klossowski begins by asking what precedes and drives a person’s conscious thought and actions, and finds the answer in the unconscious and perverse forces of desire and feeling. These impulses, which in their variety can’t be satisfied simply by sexual reproduction, need to be oriented in order to be fulfilled and so conjure a phantasmatic image of their desired object. It is through this image that these unconscious forces coalesce into the subject’s identity: in Klossowski’s philosophy, your obsessions tell you who you are; the picture invents its maker. He then turns to a historical example to describe how these obsessional images are externalized and drive the pro­du­ction of objects. He cites the ancient Roman practice of making ‘simulacra’ – models of gods – which acted as vehicles for the worldly wants and needs of the citizenry, and constitute an early form of mass reproduction. These representational figures (and the gods themselves) were considered to be like any other useful goods and the artwork was indistinguishable from anything else made to serve a need. Importantly, Klossowski argues that for something to be desirable it has to be given an economic value: you only realize how much you want your pleasure when you know its relative price. In De Sade’s novels, he finds parallels between erotic play and the commercialization of desire and affect.

The sadist desires a certain act depending on the quantity or the quality of the pleasure or pain it affords – how many are whipped or who the victims are – just as markets create desirability either through an object’s mass production or by demonstrating its supposedly superior properties.

Klossowski thus contends that both the individual’s identity and their desires are fundamentally invested in systems of valuation and commercial reproduction. As such, his book presents a timely intervention in understandings of ‘affective labour’ popularized in the work of political philosophers Michael Hardt and Antonio Negri, amongst others. If such theories focus on the ways in which capitalism solicits and manipulates emotional responses from consumers, Klossowski invites us to think about how emotion structures the market in the first place. It’s also a potential challenge to theories

of sexual liberation propagated by the likes of the queer theorist Guy Hocquenghem, for whom the unleashing of perverse desire holds a revolutionary potential. Living Currency also invites us to rethink the economic status of art by reformulating the concept of ‘use value’. Not only is the artwork

a tool or utensil for the articulation of the self but, Klossowski argues, all useful goods originate in the expression of emotional impulses.

Living Currency is no defence of capitalism. Instead, it encourages readers to re-imagine the relationships between work and play, exchange and affect, in ways even more radical than those proposed by socialist utopian thinkers. After all, the equal distribution of labour, favoured by Marxists, merely modifies the extent to which desire is restricted by work and turned into a reward for industriousness. To be truly liberated, our unconscious impulses would have to be given free reign and desire would need to take precedence over labour in shaping economic, industrial and social relations. What kind of society would that look like?