'He has a vivid ... style in which it feels like he's leaping directly into your mind.'

Paul Clinton is a writer, curator and editor based in London, UK. He is the 2019-21 Royal Academy Fellow in Criticism, Royal Academy Schools, London.

For four years he was a senior editor at the international art and culture magazines Frieze and Frieze Masters, before leaving to work as a writer and take up the post of lecturer in curating at Goldsmiths. His writing has appeared in magazines such as Frieze, the London Review of Books, MOUSSE, Art Monthly, Art Review and The White Review. Articles include on the artists Gustav Metzger, Cosey Fanni Tutti, David Goldblatt and Terry Richardson, the queer theorist Didier Eribon and on topics as diverse as class in the art world, solidarity in activism, and the philosophy of Pierre Klossowski. He has also been commissioned to write exhibition catalogue essays on artists such as artists Bonnie Camplin and Sophie Jung, and shows from London to Milan. In addition, he has made short videos covering social mobility and interior design with Pablo Bronstein, curating fashion, and staging biennials in the UAE.

In 2015, he curated the group exhibition 'duh? Art & Stupidity' featuring almost thirty international artists, with performances, new commissions and public artworks. His research on stupidity led to an invitation to edit a special issue of the cultural studies and critical theory journal Parallax (Routledge), with contributions from philosophers and theorists Mieke Bal, Jane Blocker, Claire Colebrook and David Jenneman. The popularity of this issue resulted in a sold out curated film programme and symposium at South London Gallery. Amongst his other curatorial projects are film programmes for ICA London and Kunsthal Charlottenborg, Copenhagen. In 2014, he curated the conference Shimmering World, which featured keynote lectures from artists Ed Atkins and David Panos, and a commissioned performance from Hannah Sawtell, live broadcast from her show at the New Museum, New York. In 2018 he has curated the exhibition 'Forbidden to Forbid' at Balice Hertling and Goswell Road, Paris, and co-curated the queer artists' book fair Strange Perfume at South London Gallery.

Invitations to speak include for the Whitechapel Gallery, Camden Arts Centre, Tate Modern, in London, Museum Tinguely/Kunsthalle Basel, Soppen, Oslo, and Färgfabriken, Stockholm, and he has taught at Central Saint Martins, Goldsmiths, University of Reading and the Royal College of Art. Media appearances include being interviewed on Financial Times LIVE, BBC Radio, Resonance FM and in The Art Newspaper, whilst projects and exhibitions have been covered in magazines including The Guardian, Art Monthly, MOUSSE, Sleek, Art Review and Inferno magazine amongst many others. He was also a founding member of the bands Maison Crimeneaux and No Bra, contributing to the latter's album Dance and Walk (2006).

As of 2018, is also a faculty member of the alternative art education and studio programme CONDITIONS, run by David Panos and Matthew Noel-Tod, and has been on the selection committees for awards and exhibitions including Art Night London, run by the Hayward Gallery. 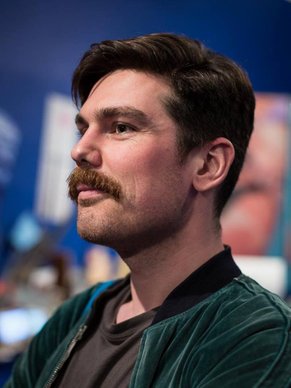